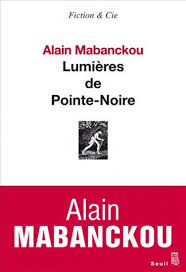 The latest addition to my website is Alain Mabanckou‘s Lumières de Pointe-Noire (The Lights of Pointe-Noire). This is a fictionalised autobiography following from his earlier Demain j’aurai vingt ans (Tomorrow I’ll be Twenty). It tells primarily of his return to the Congo twenty-six years after he left, his mourning for his mother, Pauline and, to a lesser extent, for his stepfather, Roger. Inevitably, much of the book is about his earlier life. His biological father left before he was born and Pauline moved in with Roger, who already had seven children with Martine. Roger, a hotel receptionist, divided his time between the two families and this seemed to work well – both women accepting the situation – till Roger acquired a third mistress. The narrator tells various stories about his mother and his family, involving witchcraft, superstitions, money, politics and the local culture. Though much of it is about his earlier life, we also follow what happens to him on his return, including the greed of his half-siblings, his problems with his mother’s property and and the fact he is naturally out of touch with life in the Congo. Indeed, he seems quite glad to leave and sneaks off back to France without telling anyone. It is certainly an enjoyable book and will appear in English next month (14 May) in both the UK and USA.