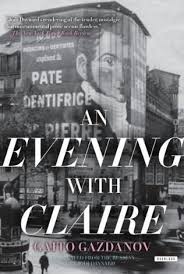 The latest addition to my website is Gaito Gazdanov‘s Вечер у Клэр (An Evening with Claire). This was Gazdanov’s first novel, written when he was only twenty-six and living in Paris, after escaping from revolutionary Russia, via Istanbul. The book, which has been called Proustian, is essentially autobiographical, telling the story of Kolya Sosedov, as he grows up in a well-off family, in the provinces. He is introspective, always carrying out pre-Freudian self-analysis on himself, and after his father and older sister die, something of a solitary boy. We follow his schooldays, his time in military school, and then his decision to join the Whites, not out of any firm political conviction but because they were there and he wanted to see war. He does see war and all its horrors but seems to take it in his stride. When he is thirteen, he meets Claire in Kislovodsk, where he is staying with his grandparents. They become tennis-playing friends but, when her mother is rude to him, they drift apart. The next time he meets her, she tells him that he is married. The novel starts some ten years later, when he is again with Claire (still married, though her husband is in Ceylon) and again the experience is frustrating for him. However, the book’s strength is his autobiographical account of his life and times and his introspection. It had something of an impact on the émigré Russian community at the time, because it was so evocative, but is still of considerable to us nearly a hundred years later.