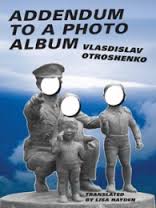 The latest addition to my website is Vladislav Otroshenko‘s Приложение к фотоальбому (Addendum to a Photo Album). This a hilarious and somewhat fanciful account of a Cossack family of thirteen brothers, the children of Annushka and (with one exception) Malakh. The one exception is the somewhat blustering Semion, the eleventh son, who is conceived and born while his father is fighting in World War I. Annushka, believing Malakh to be dead (the informant had even brought his head) has an affair with a Greek circus-owner and Semion is the result. (The Greek will later come up with a complicated plan for Malakh to adopt Semion, after Malakh’s death is found to be exaggerated.) Malakh does return but then disappears into a cubby-hole in the massive house and is not seen for, allegedly, forty years. The photo of the title is a regular event that Annushka calls for, with the entire family, and much is made of this and the complexities surrounding it, including the choice of photographer. Uncle Pavel (the story is told by a nephew or niece who refers to all the brothers as Uncle but whose identity is never revealed) on an expedition to find the cause of strange noises in the huge house, stumbles across his father’s cubby-hole and Malakh is persuaded to come out and join in the photo event.The focus is on Semion and Malakh but we also learn a little bit about some of the brothers, including Porphyry, who is very rich and who, on seeing Izmail at birth, immediately takes him away to his house. Izmail’s birth causes Malakh to retreat to his cubby-hole. Izmail, who is simple-minded, lives with Porphyry, whose relatives rob him blind, leading him to perpetually plead poverty, despite his riches. It is highly entertaining, often told with tongue in cheek, with elements of what we might call magic realism and a distorted chronology. Interestingly enough, though much of it is set in Soviet period, the Soviet system is not mentioned at all. The book has been translated into English by the superb Lisa Hayden and will be published next month (March 2015).