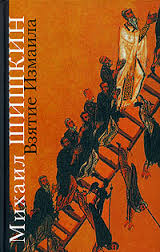 The latest addition to my website is Mikhail Shishkin‘s Взятие Измаила [The Taking of Izmail]. This is one of his earlier novels, not (yet?) translated into English but, in my view more enjoyable than his two novels that have been translated into English. The blurb on the back of the French edition (which I read) says that even the author seems to lose track of what is going on. This may well be true but is part of the fascination of this novel. Shishkin starts off with a lawyer who specialises in helping young women accused of killing their babies but then moves on to another story, and then another, and so on. Often we do not know who is the narrator or who s/he is narrating to. He uses variations of their names – initial, familiar first name, patronymic and surname – often in an arbitrary fashion, so that it is not always easy to tell whether they are the same or different people. As in his other two books, there is inevitably a male and female Sasha. Characters jump into stories, disappear and then reappear several stories later. Of course, for much of them, life is grim. We see the horrors of Russian prisons and Russian psychiatric treatment but also individual sufferings and problems. We learn about phrenology, Volapük and the Russian law making it a criminal offense not to assist someone in mortal danger. But what Shishkin does do – and, I think, better than in the other two novels – is tell stories about Russians, Russian life, Russian customs, Russian history and, for good measure, about Hyperides, the Greek orator. It is a pity that it has not been translated into English, though you can read it in French and Italian, and I would hope that it will eventually appear in English.

10 Replies to “Mikhail Shishkin: Взятие Измаила [The Taking of Izmail]”