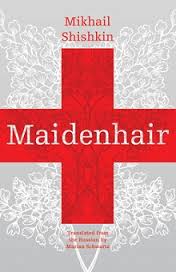 The latest addition to my website is Mikhail Shishkin‘s Венерин Волос (Maidenhair). This is a very complex novel that romps through Russian history, primarily of the past hundred years but also dips into earlier history, including Xenophon. An unnamed Russian-German interpreter is the link between the various stories. He works for the Swiss authority dealing with asylum seekers and his job is to interpret for Russian-speaking applicants, many of whom come up with very fanciful stories, which are all too often untrue. He also writes to his son – the interpreter and his wife are divorced – and also recounts his early life and his time in Italy, and how he met her. One job he almost got, in his early days, was writing a biography of a singer and actress, Bella Dmitrievna, but this fell through. Despite this, we get a very detailed biography of her, from her childhood in Rostov, the Russian Revolution and the period afterwards, to her success in Soviet Russia. However, plot is not the key to this novel. It is about giving a kaleidoscopic view of Russia, warts and all (and there are a lot of warts, including a lot of violence, both because of Russia’s various wars and internal issues), though also showing that, somewhere, deep down, it has not all been bad. This a novel that cannot be described in a short or even long review but one that needs to be read and experienced. We should be grateful that it is now available in English.