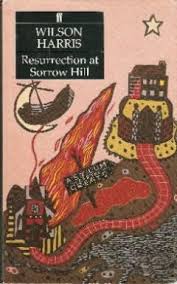 The latest addition to my website is Wilson Harris‘ Resurrection at Sorrow Hill. This is another hard slog, though Harris takes up many of the both the themes and locations he has taken up in his earlier work. We are in the Guyanese jungle, at the confluence of three rivers, above which sits Sorrow Hill, which we have already seen in The Palace of the Peacock. We start with a group of imaginatively named characters – Tiresias, who is the narrator at this point, her grandson, Dr Daemon, whose pregnant wife, Ruth has recently drowned when a riverboat capsized, Hope, who will narrate much of the rest of the book, who is eighty-seven and having an affair with Butterfly, and Christopher De’Ath, clock repairer and husband of Butterfly. De’Ath, of course, kills both Hope and Butterfly but either they are both dead and alive, as we see, but also they do die and resurrect seven years later, after De’Ath has served his prison sentence. (This is the second book this week I have read this week, where a character is shot dead and comes back to life. My random reading often throws up odd coincidences like this.) After resurrecting, Hope is admitted to Dr. Daemon’s Asylum for the Greats, a former prison where De’Ath served his prison sentence, where various inmates channel famous people from the past – Monty channels Montezuma, Len Leonardo da Vinci, Mark Karl Marx and Archie an archangel. The role of myth and history, and the Guyanese jungle as a metaphor for a journey to hell, as well as the borderline between sanity and insanity all play a role in this book but, as always, with Harris, it is hard work.