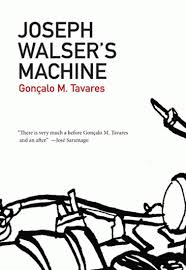 The latest addition to my website is Gonçalo M. Tavares‘ A Máquina de Joseph Walser (O Reino (The Kingdom) series) (Joseph Walser’s Machine). As the title implies, Joseph Walser has a relationship with machines. He works in a factory, operating one (we do not know what it/he does). His boss, Klober Muller, tells him how dependent humans are on machines. And he himself considers that humans are not much more than sophisticated machines. His relationship changes when he is injured by the machine and has to have a finger amputated, so that he can no longer operate the machine. He becomes a clerk. Walser lives in an unnamed European city, probably, judging by the names, somewhere in Central Europe. He is married to Margha, though he later learns she is having an affair with Klober Muller. He collects small bits of metal. He is conventional, a daydreamer and a sloppy dresser. His only real excitement, apart from his job and metal collection, is his Saturday night with a few workmates, playing dice. 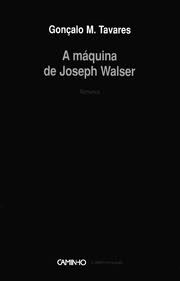 There is a war on, as the city is being invaded but neither he nor most of the inhabitants of the city seem too bothered by this. However, once the invading army takes over, one of of Walser’s dice-playing friends proposes resistance. Walser is not interested. However, the resistance does take place, with bomb attacks on the occupying forces. Walser keeps away from the dice game. While the human-machine relationship is key, Tavares puts up Joseph as something of the ordinary man – generally solitary, a good citizen, indifferent and unwilling to raise his head above the parapet, though, as we learn later in the book, when he can get away with it, he will. Are we Joseph or do we judge him for his weaknesses? The book has a hint – though only a hint – of Kafka in it and is an interesting and thought-provoking work.