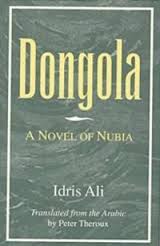 The latest addition to my website is Idris Ali‘s دنقلة : رواية نوبية (Dongola). This a novel by a Nubian. Nubia was a separate kingdom, in the south of Egypt, and north of Sudan. Indeed, as the book tells us, it was a Christian kingdom, till conquered by Egypt in the late Middle Ages. For a long time the Nubians resisted Egyptian invasion, thanks to their archers but eventually succumbed and converted to Islam, forgetting their Christian past. Awad Shalali, the hero of this book, has been fighting for Nubian independence and has paid for it by being sentenced to ten years imprisonment in Egypt, where he was beaten up and saw his cousin beaten to death. He is now free but his troubles are not over, as the Egyptian authorities still think he is fighting for Nubian independence. He realises that he might be re-arrested so manages to flee to Sudan, with the help of friends and sympathisers. He is away for nine years, during which time he does not contact his mother. She is a widow. Her husband had left her to live in Cairo and taken up with an Egyptian woman, who had poisoned him for his money. Awad eventually returns, having managed to obtain a good job as a steward on a cruise ship, and become engaged to a French woman. His family and village are outraged and persuade him to marry Halima, the woman looking after his mother, which he does. However, he then goes off again and again they do not hear from him. While not a great novel, it is interesting to learn about Nubia and its problems, not least because this and his later novel Poor seem to be the only Nubian novels translated into English.