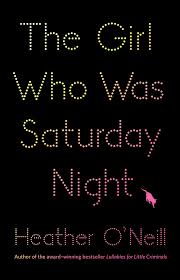 The latest addition to my website is Heather O’Neill‘s The Girl Who Was Saturday Night. This is another book in my reading of literary prize shortlist books that aren’t the Man Booker, this book being on the Giller Prize shortlist , with the winner to be announced 10 November. This novel tells the colourful story of nineteen-old Nouschka Tremblay, who lives in the less fashionable part of Montreal. She is very attached to her twin brother, Nicolas. Both are drop-outs but she has just started going back to school at the beginning of the book, while he makes his living from petty crime. Their father is Etienne Tremblay, a man who was a very successful folk singer in Quebec (but unknown outside the province). Etienne seduced a young woman at a party, had unprotected sex with her and then found that she was pregnant with the twins and was only fourteen. He went to prison, the mother was spirited away and the twins have been brought up by their grandfather. Etienne used them as props for his act but they rarely see him now. They have never seen their mother since though, during the course of the book, Nicolas tracks her down. Meanwhile, Nouschka, unwilling to be without a boyfriend, leads a varied sex life till she marries Raphaël, a man even she admits is the most unsuitable husband, as he has had a history of mental illness (threw himself off the Jacques Cartier Bridge and survived, has tried to kill his father and was arrested for having over a hundred dogs in his house). All this is told against the background of the Quebec separatist movement, culminating in the (just) failed referendum in 1995. It is a lively novel, as we see the seamy side of life in Montreal but it is witty and great fun, even if the characters are seriously flawed human beings.