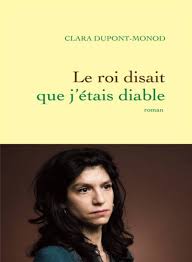 The latest addition to my website is Clara Dupont-Monod‘s Le roi disait que j’étais diable [The King Said I Was a Devil]. This novel is on the shortlist for this year’s Goncourt Prize (link in French), with the winner to be announced 5 November. This is a first person account by Eleanor of Aquitaine, the most powerful woman in Europe during her lifetime, who became Queen of France when aged thirteen and then, after having her marriage to King Louis VII of France annulled (despite their having two daughters) married King Henry II of England, by whom she had eight children, including Kings Richard I and John. However, even before her marriage to Louis, at age thirteen, she was very powerful, being Duchess of Aquitaine, a territory ten times the size of France. Dupont-Monod shows her as a tough, forceful, highly competent and very intelligent woman, as it is she who initiates various military actions, which she and her husband then carry out forcefully and, if she had her way, brutally, though the religious authorities are able to limit her some of her actions. Louis had not been destined to be king (his older brother died in a riding accident) and had wanted to be a monk and is pious (a synonym for hypocritical, for Eleanor), though, under her guidance and seduced by her sexual charms, he becomes more forceful. Dupont-Monod admits in an afterword that, in real life, Eleanor was perhaps more pious than she is painted in this novel but she is clearly writing a feminist novel, showing that a woman can be as tough, as competent and as intelligent, if not more so, in most cases, than any man, even in the Middle Ages. It is a thoroughly enjoyable novel, as we follow Eleanor’s views of her husband, Paris, France, religion and men, most of which is far from flattering. It is by no means the only novel about Eleanor of Aquitaine – there have been several in both English and in French