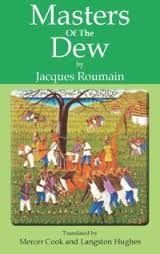 The latest addition to my website is Jacques Roumain‘s Gouverneurs de la rosée (Masters of the Dew). While not the first Haitian novel on my website, it is the first written in French. Moreover, it is a considered a classic of Caribbean literature. It tells the story of Manuel, a Haitian man who has been absent from his country for fifteen years, working on sugar plantations in Cuba. When he returns, he finds two things have changed. There has been a serious dispute over land sharing, resulting in armed conflict and death and with the two extended families still at loggerheads. Secondly, there has been an extended drought, so much so that it is becoming increasingly difficult for the villagers to grow their crops. One or two have started leaving to start a new life elsewhere. Manuel, as a more or less outsider, makes it his task to find a new source of water and to bring the two warring families together, so that the water can be efficiently and equitably delivered to the village. He tries to do this with the help of Annaïse, a woman from the family opposed to his, but he has opposition not only from Gervilen, a man from the same family, who is in love with Annaïse, but also from the police chief, who wants to take the land for himself, by lending money to the villagers at usurious rates and then taking the land when they cannot repay. While Roumain was a communist and he does preach the idea of solidarity as the best way forward for the working man and woman, this is not a communist novel. Rather it is a first-class novel about the struggle to survive and live a good life.