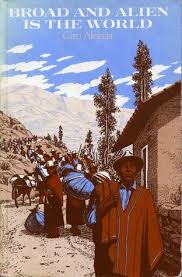 The latest addition to my website is Ciro Alegría‘s El mundo es ancho y ajeno (Broad and Alien Is the World), a classic Peruvian novel of the 1940s. Alegría was a fighter for the rights of the native population of Peru. This novel is about the brutal exploitation of the natives by the rich and powerful landowners of Spanish descent. The story is about a remote Andean village called Rumi, where the native, Quechua-speaking population has lived and owned the land for many years. However, the local rich landowner has his eye on their land, both for his own greed but also because he hopes to force the natives to work in his mines and other industrial plants. The public defender says that the villagers have nothing to fear, as their claim is valid but the landowner manages to bribe the judge, the public defender and various others, who act as false witnesses. The villagers have to move out and relocate to a hilly village, where it is difficult to grow crops and breed cattle. Indeed, the cattle, of their own accord, head back to the village of Rumi where the landowner’s men take them. The mayor of the village and hero of the first part of the book tries to reclaim one of his cows and he is arrested and thrown into prison. He will later be beaten up and die. 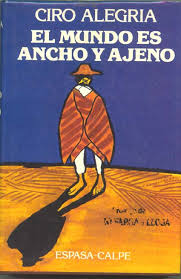 The mayor and his late wife had brought up a child who was the son of a rape victim during one of the civil wars This boy had fled when accused of a crime but now, many years later, unaware of what has happened, returns to the village. When he finds out what has happened, he organises resistance but, again the landowner wants the villager’s land for the same reasons as before and the fight is unequal. Alegría makes no bones about where his sympathies lie. He tells a superb tale of the dignity of the natives resisting the cruelties of the oppressors but also gives us a detailed portrait of the culture, beliefs and superstitions of the native population. With the advent of the Latin American boom, classic Latin American novels like this have faded into the background. This is a pity. Though a straightforward realistic novel, without a hint of magic realism, this is a very fine novel which should be better known outside Latin America. Fortunately, it is readily available in Spanish, English and several other languages.