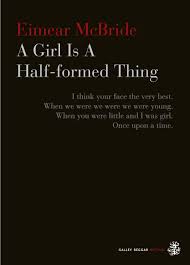 The latest addition to my website is Eimear McBride‘s A Girl is a Half-formed Thing. McBride has been hailed as a genius for this novel and it has received quite a few positive reviews, though some less positive. I am afraid that I am in the latter camp. It is written in a stream of consciousness style, starting in the womb and therefore written in baby talk. McBride has said that she was writing the images she saw in her head as she tells the story of an unnamed girl, who comes from a poor background in rural Ireland. Her father runs off and then dies and her mother is somewhat useless. Her brother, whom she is very fond of, gets a brain tumour and though he initially recovers – he will get worse later in the book – he is not the same as he was. She is sexually assaulted by her uncle (her mother’s brother) when she is thirteen. She does badly at school and leaves to become a shelf-stacker, living on her own and having numerous casual sexual relationships, including with the abusive uncle, and drinking and misbehaving, till her brother gets worse again. It seems to be me – and McBride has more or less admitted this – that this book just trots out the usual Irish stereotypes – drink, religion, sex and sexual abuse, drugs and so on – and while, obviously, this could be the basis for a fine novel, I do not think this one is. All power to McBride and her publisher, the very small Galley Beggar Press, for publishing this novel but it just did not work for me.