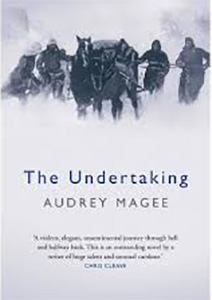 The latest addition to my website is Audrey Magee‘s The Undertaking, one of the books on the shortlist for the Women’s Prize for Fiction. This is Magee’s first novel and a fine novel it is. The hero is Peter Faber, a German soldier in World War II, who is fighting on the Russian front. He has been allowed to marry a German woman remotely. A pastor marries him and a photo of the woman (Katarina Spinell) in Russia while, at the same time, she marries a photo of him back in Berlin. The advantage for him is that he gets three weeks leave back in Germany. The advantage for her is that, if he is killed, she gets a widow’s pension. Peter’s father, when he finds out about the marriage later, thinks that it is merely part of the German breeding programme. On his leave, the two get on well and after he returns, she finds that she is pregnant. Meanwhile, he has met his parents-in-law and a friend of his father-in-law, Dr Weinart, who is both a medical doctor as well as a senior Nazi official. Dr Weinart takes Peter out at night to hunt out Jews, which Peter does. After Peter’s return, the Spinells are given a much nicer flat, taken from a Jewish family. However, back in Russia things are not going well for the Germans and Peter and his comrades are cold and hungry. Once they get to Stalingrad, things get worse and, as we know, the soldiers are soon abandoned by their generals. Meanwhile, things are not going well in Berlin either. While this certainly is a well-written and enjoyable novel, I do not see it winning the Women’s Prize for Fiction.