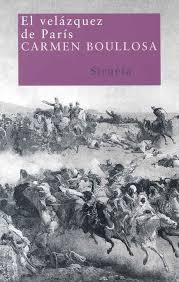 The latest addition to my website is Carmen Boullosa‘s El Velázquez de París [The Velazquez of Paris], another wonderful post-modernist, feminist romp through history. This one tell the story of Velázquez‘s painting The Expulsion of the Moriscos (the Moriscos were the descendants of the Moors who occupied Spain and who had converted to Christianity but were still, in many cases, expelled to North Africa). The painting is believed to have been lost in 1734 when the Alcázar Place burned down. However, Boullosa, who is the main character in her own novel, overhears an old man telling two attractive women who are accompanying him, that the painting was saved and that he now owns it, though the women are indifferent and have never heard of Velázquez. Boullosa the author (but not the character) goes on to tell how it was saved by Mají, a twelve-year old boy, son of a servant in the palace who rescues it, not because of his love of art but because one of the women in the painting is apparently his grandmother’s grandmother and he is saving his own heritage. Mají flees the palace with the painting but falls in with a gypsy couple and it is through the gypsy woman, Isabella, that the painting is passed down. It is great fun, very well-told, always lively, witty and intelligent. Sadly, it has not been translated.