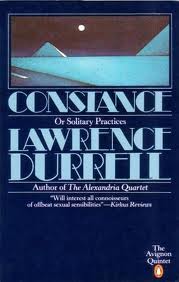 The latest addition to my website is Lawrence Durrell‘s Constance or Solitary Practices, the third book in Durrell’s Quincunx series. This one is set during World War II, with the various characters we have met in Avignon, scattering before the advancing Germans. Aubrey Blanford, the writer, goes off to Egypt as secretary to Prince Hassan, where he will be badly injured, while Constance’s lover, Sam, will be killed, as a result of British shelling. Constance herself will go to Geneva to work for the Red Cross (she is a doctor) but will return to Avignon with the Red Cross, as she is a Swiss citizen. Livia is in Germany but will return to Avignon as a nurse and we will learn her real reason for going to Germany. Meanwhile, we also follow the career of German General von Esslin, a Catholic aristocrat, who is mildly injured in the invasion of Poland but enjoys both the North African campaign and capture of Paris but ends up with the meagre reward of being in charge of Avignon, where he has to find the Templar treasure for Hitler. Durrell has his usual lyrical set-pieces, though less of his pompous erudition, as he focuses on the course of the war and its effects on the key characters.