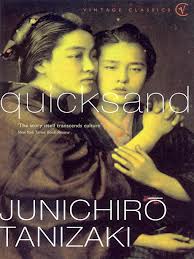 The latest addition to my website is Jun’ichiro Tanizaki‘s 卍 (Quicksand). This a very erotic novel, even by Tanizaki’s standard. Sonoko Kakiuchi is a widow, telling her story to the author. She had been married to a lawyer and had accompanied him into town to go to art school. There she had met Mitsuko, a very beautiful young woman, who was a fellow art student. The two had become friends and then lesbian lovers. However, Mitsuko is deceitful, selfish and seemingly without scruples. She deceives Sonoko on more than one occasion, though Sonoko herself is hardly a model citizen, having had an affair (with a man) before and now having an affair with a woman, behind her husband’s back. Things get complicated, when Sonoko finds out that Mitsuko has a boyfriend, Watanaki, who seems even more unscrupulous than she and gradually first Sonoko and then her husband are dragged into a series of murky and ultimately fatal situations. Its is a very accomplished novel, dealing with both the issue of where does truth lie and who is telling it (we hear the entire story solely from Sonoko’s perspective) as well as describing complex sexual relationships.