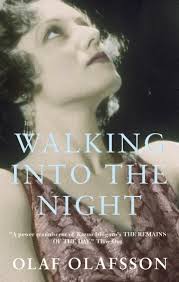 The latest addition to my website is Ólafur Jóhann Ólafsson (Olaf Olafsson)‘s Höll minninganna (Walking into the Night). The main interest in this novel is that much of it is set in San Simeon, aka Hearst Castle. Christian Benediktsson, as he is known, though he has anglicised his first name Kristjan, is newspaper magnate William Randolph Hearst‘s factotum and dogsbody, a position he has held for sixteen years. The novel starts in 1937, just as Hearst’s fortunes take a downturn and he is obliged to sell off many of his assets and hand over control to an administrator. Kristjan remembers the good old days of parties with Hollywood celebrities and the continual stream of arrivals of art works from Europe. But Kristjan has a past, in the shape of a wife and four children whom he has abandoned many years ago in Iceland. He thinks about them and writes letters to his wife, Elisabet, which he never sends. We gradually learn what persuaded him to leave Iceland and settle in the United States and how he came to work for Hearst. We also learn how he feels remorseful and how his past catches up with him. While the main attraction is the interaction with Hearst and Hearst’s mistress, the actress Marion Davies, Kristjan’s story, that of a phlegmatic Iceland who tends to keep his feelings to himself but who makes a mistake he comes to regret, helps make this a thoroughly enjoyable novel.