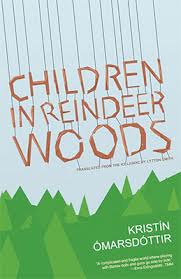 The latest addition to my website is Kristín Ómarsdóttir‘s Hér (Children in Reindeer Woods). (The Icelandic title means simply Here.) It is set in an unnamed country which appears to have been invaded by foreigners. Most of the action takes place in a temporary children’s home called Children in Reindeer Woods, located in a remote area of the country. At the beginning of the novel, a group of soldiers arrives at the home and proceeds to shoot the three adults, three of the four children and the dog. One of the children – Billie, a twelve year old girl – manages to hide under a bush and watches the soldiers. They go into the house and there is more shooting. Only one emerges. He – Rafael – proceeds to drag out the bodies of his companions and buries them and the others. When Billie emerges from the bush, he is friendly towards her. He says that he has always wanted to live on a farm and he starts to take care of Billie, bathing her, feeding her and making sure that she is properly dressed. Rafael carries on running the farm as best he can, while Billie, seemingly little perturbed by the killings, carries on with her life under Rafael’s caring supervision. But there is a war out there and a few visitors turn up – Peter, an incompetent parachutist, sent to bring supplies to Rafael’s troop, two tax inspectors, a nun and Isaac the shepherd who comes regularly to the home. Can Rafael and Billie adapt to the rural life or will the war get in the way? Ómarsdóttir tells something of a strange tale about war and its effect on participants and civilians caught up in it.