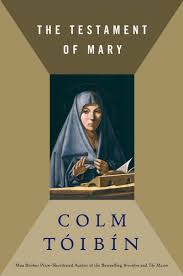 The latest addition to my website is Colm Tóibín‘s The Testament of Mary. I have generally not enjoyed Tóibín’s work and this was no exception. Indeed, I only read it because it was on the Man Booker shortlist. It is the testament of the Virgin Mary, writing long after her son’s death, speaking not as a divine figure but as a human and, above all, as a mother. She is sceptical of her son’s divinity and feels that he has been manipulated for political ends, a view she continues to hold long after his death. She is critical of the disciples and tells the gospel writers, to whom she is telling her tale, what she thinks about them. While it is well written and could appeal to both Christians and non-Christians, it did not work for me.