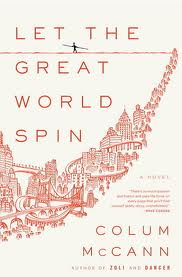 The latest addition to my website is Colum McCann‘s Let the Great World Spin. This is a superb novel, with its central theme revolving around the other key event involving the World Trade Center Twin Towers, namely Philippe Petit’s tightrope walk between the two towers on 7 August 1974. McCann tells the stories of several people in New York, whose stories touch on Petit’s as well as on the fictional story of a thirty-eight year old African-American prostitute, Tillie Henderson, her daughter, Jazzlyn, and Jazzlyn’s baby daughters. The themes of Petit’s walk – its quasi-mysticism, its impact on New Yorkers and its challenge to authority (Petit was arrested after the walk) – and the theme of the story of the prostitutes – survival in the grim New York world – affect a lawyer and his wife who have lost a son in Vietnam, as well as other mothers who have lost sons in Vietnam, a couple of artists who have been heavily into drugs and, in particular, an Irish worker priest and his brother. McCann links up the stories and themes in a brilliant way, giving us a first-class novels of the pre-9/11 New York and its twin towers. If you are interested in knowing more about Petit’s walk, there is a a film of it.