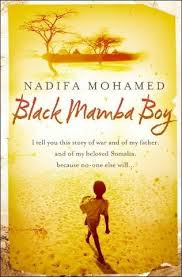 The latest addition to my website is Nadifa Mohamed‘s Black Mamba Boy. Mohamed is one of the Granta’s Best Young British Novelists, though she is Somali and this novel is very much a Somali novel. It tells the story of her grandfather, Jama Mohamed, and his difficult but adventurous life growing up in the 1930s and 1940s. Unable to find work, his father leaves what was then British Somaliland and goes to Sudan. When he does not return for a while, his mother takes him to Aden where she works long hours in a coffee factory and he roams the streets. He returns to Hargeisa but is not happy there and, one day, he leaves his relatives and sets out for Sudan to find his father, despite not knowing where Sudan is or how far and where exactly his father is. He has a difficult journey but is often aided by other Somalis who seems to be scattered all over East Africa. Things do not go well for him and he gets caught up in the Italian-British battles in World War II and is nearly killed. After the war, he seems to be doing well but things fall apart again and he is again off on his travels, heading to Palestine, Egypt and even England. He leads a very adventurous life and Mohamed tells her tale well of all his adventures and the political background to what is happening at that time.