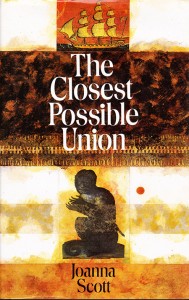 The latest addition to my website is Joanna Scott‘s The Closest Possible Union. The novel is set almost entirely on a slave ship and tells the story of Tom Beauchamp, a fourteen-year old boy, son of the owner of the ship (though this is known only to the captain and first mate), his fears and his yearning for adventure. He learns that one of the crew is a woman, with an agenda of her own to find her long-lost half-brother. He hears fanciful stories from various crew members. He is apprehensive about the slaves though has few qualms about the morality of slaving, even though the novel is set in the period when it is essentially banned. Above all, he is afraid, as any fourteen-year old boy would be in such circumstances. Scott tells the story from the perspective of the time, with the views, morals and language of the period, not as a modern story about the evils of slave-trading, and it is this that makes it work so well. Sadly, the book is out of print.