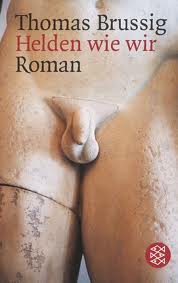 The latest addition to my website is Thomas Brussig‘s Helden wie wir (Heroes Like Us). This had considerable success in Germany, as it was one of the earlier novels about the fall of the Berlin Wall. However, it takes a somewhat different approach from other such novels as the narrator of the novel claims that it is his penis that is responsible for the fall of the Berlin Wall. The earlier part of the novel is about his upbringing and focuses extensively on his penis and his masturbatory fantasies à la Portnoy’s Complaint. The second part of the novel sees him joining the Stasi, the East German secret police, where he reveals the total incompetence of that organisation. Finally, we see his penis bringing down the Berlin Wall. It is certainly amusing but does get a bit too obsessive about the penis/sex bit.