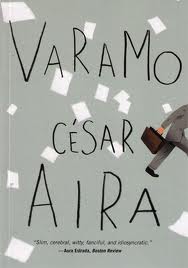 The most recent additions to my website are two César Aira novels. I continue to be amazed by everything I read of his. Varamo (Varamo), which has been translated into English, is a novel about a low level Panamanian civil servant who goes home one evening and, though he has never written, indeed, never even read a single line of poetry, writes, without correction, one of the (fictitious) classics of Central American poetry. As this Aira, lots of other things happen in the space of a fairly short novel, involving forged money, embalming, a possible revolution, the smuggling of golf clubs, pirate publishing and the hearing of voices. 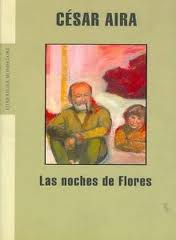 Las noches de Flores [The Nights of Flores], sadly, has yet to be published in English (though it has been translated into several other languages). It tells the story of a pizza delivery service in the Flores suburb of Buenos Aires. It starts off fairly low key, with the account of an elderly couple who work for the service, delivering on foot, as well as stories of some of the young men who work for the service. In particular, there is a kidnapping and murder of a delivery driver. Suddenly, the novel explodes, as a massive conspiracy is revealed and all hell breaks loose. This, like the other six Aira novels I have read, only confirms Aira as one of the leading novelists of the age.