When I first started my site, many years ago, it was not my intention to cover the world. My aim was to review (and therefore encourage others to read the books reviewed) of what I considered the most interesting novels since approximately the beginning of the twentieth century. I expected to be focusing on a wide array of novels from North and South America, Europe, South and South-East Asia, Australia and New Zealand and a few from other areas such as Africa and the Middle East. I did not expect that the Great Vanuatuan novel would be of the slightest interest to me. But, as I started working on the site, I came across more and more countries that were, to my surprise, producing novels and in many cases, novels of some interest. Some were difficult to get hold of. Some were not readily available in English or, indeed, in a language I could read. However, I have now expanded my range to include as many countries as I can. At the time of writing I have reviewed books from 176 countries and have links to sites for 225 countries and more will certainly be added in the not too distant future. See my statistics page for details.

Since working on this site, I have come across a mild phenomenon (Internet meme?) which involves people reading a book from every country. Here are a few I have found:

Reading the World and his blog. An anonymous Brit who does not seem to have posted since January.
Ann Morgan is a writer, who writes, for, amongst others, The Guardian newspaper.
Världsbokbloggen (it means World Book Blog) is a Swedish blog by a blogger called Fred
En bok från världens alla länder is another Swedish blog by a blogger called Elinko
Harry Rutherford also has Reading is a way round the world
198 books from Brazil)
The Literary Nomad is reading her way round the world
Shoshana’s Books of the World Challenge
Around the World in 100 Books
Biblioglobal
Rob’s Round the World reading
Ceinwenn’s Global Reading Challenge
Reading Globally (A Library Thing group)
The Europe Endless Challenge (another Library Thing list – just Europe, not the world, and lots of participants)
Caribous Mom is reading the world. Her real name is Wendy and Caribou was her dog
A book for every country is just what it says or, rather, what it intends to be
The Reading Life blog has project 196, though only short stories
Reading Around the World (Paul Kron reading a work of fiction from every country)
Reading the Globe – a site from a twelve year old. Evil Facebook deleted it because she is twelve so now she has this: Reading the Globe
reading women writers worldwide
Around the World in 2006 books is still on letter A (and she (I am guessing she as her goodreads name is Zeborah) has skipped Andorra)
Babelio is running a book per country challenge (in French)
Avon Middle High School Library in Avon, Massachusetts did it as a school project
Various schools and libraries, particularly in the United States, have similar programmes.
Black Spring on AskMetafilter asks for suggestions
A blogger called Jimblina started but seems to have abandoned the idea
Books From Every Country On Earth also seems to have abandoned the quest
And the Plot Thickens Blog also started but she seems to have abandoned her blog as from February 2012
Sherry Chandler seemed to start doing this but does not seem to have blogged about it since and her goodreads list has only gone from eleven to thirteen
And, talking of goodreads, they have the Around the World in 100 Books list and a Read Around the World list
The Library of Congress produced lists from 1998-2002 but seems to have stopped
Bibliotravel covers this
As does Books Set in
and, for mysteries, Stop You’re Killing Me
Sites such as The Complete Review cover books from all over the world
We now have a French one
The Global Anthology is an anthology of writing from every country
Sophie Baggott is reading women writers only
If you only read one book from my country, make it… (a Reddit list)
Reading a World in Translation ([email protected] – Reading a novel from every nation state (possible))
Reading and Watching the World: Books, Film and Art (not just books but a film and artist as well)
Un país, un libro (in Spanish)
200 países, 200 libros (in Spanish)

I am sure that there are a lot more. I would be interested to hear of other bloggers/sites doing this, particularly if a) they have made a lot of progress and b) they have included some lesser-known countries (from the point of view of North Americans/West Europeans).

I would like to briefly discuss criteria, which do seem to differ.

1) The first criterion is what countries to include (and to exclude) and what constitutes a country. Wikipedia lists 193 UN member countries and some have chosen this as their criterion. (Some only mention 192 countries. South Sudan has joined since then.) This excludes Taiwan as well as a variety of national entities but is still ambitious. Others have chosen other criteria. Wikipedia has lots of possible criteria but one criterion that has been chosen is the Wikipedia list of sovereign states, giving 207 countries and including Taiwan, but also Palestine, Abkhazia, Kosovo, Niue and others. My criterion is simple. I have tried to include all UN members (though I have succeeded where the politicians have failed in uniting some countries, such as the two Irelands and two Koreas) as well as certain countries (in the broadest sense) where there is both a separate cultural identity (and, usually though not always, a separate regional language) as well as a separate literary culture, by which I mean they have produced their own literature separate from the dominant state to which they belong. This has been a bit arbitrary and has usually been based on what I can find, i.e. can I find links and/or novels for this culture?

2) The second criterion is genre. I am limiting myself to the literary novel as that is what my site is about. Most of the others seem to allow most genres, including poetry, drama, the short story, genre novels and various works of non-fiction (though generally excluding travel guides). 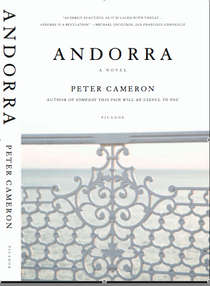 3) The third criterion is author nationality. I have limited my choices to books written by nationals of the country concerned, with one exception and the reason for that exception was that the author, Robert Barclay grew up in and was writing exclusively about the Marshall Islands. (And I could not find any other novel from there.) Others have selected books about the various countries, written by authors of other nationalities. I notice that some people have chosen Peter Cameron’s Andorra for Andorra which is a bit of a cheat. Cameron is from the US but his book is about a country called Andorra but not the Andorra, as his Andorra has a seaside town, which the real Andorra certainly does not. (There is another book or, rather, a play, which does this. Max Frisch‘s Andorra is set in a but not the Andorra.)

4) Finally, there is the issue of language. I am fortunate enough to be able to read in several languages. Most of the read-the-worlders are sticking to one language (generally English) or perhaps two, which really does limit them.

As you will see from the above links, several people seemed to have started on this project and since abandoned it. If anyone has finished – e.g. read a work from all 193 UN member countries – I have found no record of such an achievement. Ann Morgan has sort of done it but they are not all novels. There are two main reasons. The first is that there are some countries, where there are no novels. Not only does the Great Vanuatuan novel referred to above not exist, as far as I can see, there is no Vanuatuan novel at all. This is hardly surprising. It has a population of around 221,000. The novel is not part of its culture. It does have a significant poet, however. This situation applies to several smaller island nations, such as Tuvalu, the Maldives, St Vincent and the Grenadines, Palau, Nauru and so on. If I am wrong, and they do have novels, I would be glad to know. The second reason is language. If you want to read a novel from certain francophone African countries, you will find it difficult to do so if you cannot read French. I am shortly going to read a novel from Chad. If there is a novel from Chad in English, I have not found it, though I have not searched diligently as I can read French. For Rwanda, some read-the-worlders have opted either for works by non-Rwandans or testimony of the horrors translated into English. This is, of course, fine by their criteria but I am reasonably certain that there is no novel written by a Rwandan translated into English. Indeed, there are very few written in French. This is one I found. But it is not just francophone Africa. Cambodia is another country where you can only read novels translated into French, though, of course, there are testimonies available in English about the killing fields. If you want to read a novel from Turkmenistan, it helps if you can read Russian but if you cannot, Berdy Kerbabaev has been translated into German but not English. I do have a collection of Turkmenian short stories from the Soviet era in English which is not too difficult to find. The same applies to some other former Soviet states. In short, I would think that it is probably impossible at the moment to read a novel in English from all 193 UN member states and probably impossible to read anything of substance from all 193.

As I never set out to read a novel from all 193 (or all the states for which I have links), this does not bother me too much. If someone does write the Great Vanuatuan Novel or, indeed, any Vanuatuan novel, I shall be happy to read it. Obtaining the novel might be difficult – I do have a copy of John Pule’s Burn My Head in Heaven but it was not easy to obtain and is not readily available. Pule, by the way, is from Niue, which is not a UN member state. Other novels have also been difficult to obtain, even from major libraries. So, in conclusion, I shall be curious to see if any of these people actually make the target and even more curious to see what they read to do so. I wish them luck. As for me, I shall be happy to get within a dozen or so.

6 Replies to “Reading the World”