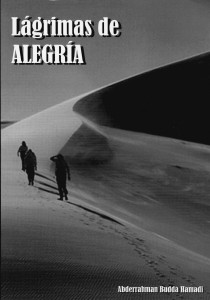 The latest addition to my website is Abderrahman Budda Hamadi‘s Lágrimas de Alegría [Tears of Joy], a (not quite) novel from Western Sahara. I am not sure that there is even a novel from a Western Saharan writer though, as Conchi Moya shows in her blog (link in Spanish), there have been novels by Spaniards about the country. Like many people, I imagine, I know very little about the country, only that it used to be Spanish Sahara and that, when the Spanish moved out, the Moroccans moved in. The Western Saharans resisted, through the Polisario, but the Moroccans have occupied the economically viable part of the country, behind a huge sand wall and there now seems to be a stalemate between Morocco and Western Sahara as to what the future should hold. There is not a great deal in English on the topic, though the Wikipedia articles on the country and its history are a good start. The site of ARSO – Association de soutien à un référendum libre et régulier au Sahara Occidental [Association of Support for a Free and Fair Referendum in Western Sahara] gives some information, with much in English. The UN, BBC, Amnesty International and Human Rights Watch all have pages on the topic. And, just to show that I am not prejudiced (though I am), here is a pro-Moroccan site. There are also various blogs such as this one, this one and this one. There are many others in French, Spanish, Catalan and Arabic. Other English ones have not been updated for a while.

As I said above, I am prejudiced. I am generally in favour of groups of people seeking their independence from a dominant colonial power. (And, yes, if the Scots want to leave the UK, good luck to them.) However, if anyone reads this blog, I doubt that it will be for my political stance so I will touch briefly on the literature. Unfortunately, all the links are in Spanish so I will try and explain briefly for those who do not read Spanish. It is a Spanish woman, Conchi Moya, who has done much to promote the culture of Western Sahara and her blogs are well worth reading if you do read Spanish. Her blog on Western Saharan literature is very helpful but, even if you do not read Spanish, you will see that there is not much. The latest one is a collection of writers associated with the Gdeim Izik protest camp, called the Saharan Spring. Sadly, their spring looks to be no more successful than the other springs in the region. 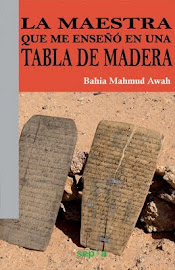 The book on the left, for example, is the story of a teacher who used traditional wooden tablets for her teaching. You can read the first chapter (in Spanish) here. Other books are history, memoirs, poetry, stories and travel in the country. None has been translated into English (or, as far as I can determine, any other language) and, as all are published by small publishers, they are not even easy to obtain in Spanish. However, what they do show is that, despite their grim political situation the writers of Western Sahara are continuing to write and we can only hope that the conflict is soon resolved and they can start producing some full-length novels.