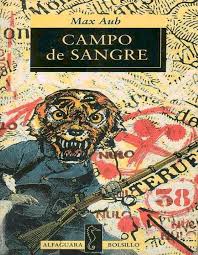 The latest addition to my website is Max Aub‘s Campo de sangre [Field of Blood], the third in his Magic Labyrinth series about the Spanish Civil War. The book opens in Barcelona on New Year’s Eve 1937. Barcelona is under bombardment by the Francoists. As in the previous book, we follow the lives of a few ordinary people on the Republican side, as they struggle with life and with the war. There is a doctor, a judge, a failed writer and a communist, who meet on New Year’s Eve. We also meet others, including an actress, a prostitute and a woman who has fallen on hard times, when her rich father was arrested and shot. The second part is about the Battle of Teruel, which the Republicans will take with great difficulty and again we follow a few individuals involved. Finally, we are back in Barcelona, where the bombing is now much heavier and the situation is looking difficult, if not desperate. Aub once again tells a first-class story of the ordinary people on the Republican side caught up in the war and their struggle to cope.