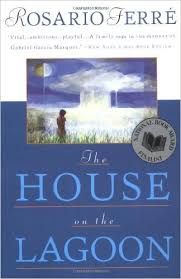 The latest addition to my website is Rosario Ferré‘s La casa de la laguna (The House on the Lagoon). Ferré, whose father was a governor of Puerto Rico, writes about a house and family on Puerto Rico, from the arrival of the Buenaventura Mendizabal from Spain at the beginning of the last century to the 1993 referendum on statehood. Buenaventura has a temper and this is passed on to his son Quintín, so much so that Isabel has doubts about marrying him when she sees him lose his temper. But she does marry him and this novel is her attempt to write about the family, hers and his, and an attempt to see how the parents’ behaviour is passed on to the children. Quintín and Isabel build a beautiful house on a lagoon, with the architect having freely stolen his ideas from Frank Lloyd Wright, though this house is one of three houses that are built on the site during the course of the book. Isabel’s manuscript is secret but Quintín finds it and is highly critical of its feminist, Independista and non-historical approach, as Isabel reveals family secrets Quintín would have preferred kept hidden, including murder, suicide, rape, forced abortion and other violent acts. Virtually all of their relatives have colourful and not always worthy pasts and it is these stories of these many characters that make the book so fascinating.