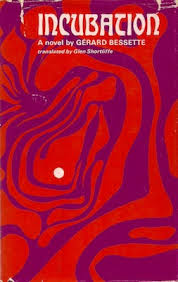 The latest addition to my website is Gérard Bessette‘s L’incubation (Incubation). The novel is entirely narrated in stream-of-consciousness style by a man known as Lagarde, a librarian by profession. He is primarily telling the story Gordon Blackwell, his friend and an English teacher at the university in the small Canadian town of Narcotown. Gordon had met Antinéa (an English woman, despite her name) in London during the Blitz in World War II. They had started an affair, despite the fact that Antinéa was married to Jack, fighting in North Africa, and Gordon was engaged to Maggie back home in Narcotown. When Jack returned, injured, Antinéa paid little attention to him but when he died, she had a nervous breakdown. Gordon returned to Canada, married Maggie and they had two children When Antinéa, ten years later, comes to Canada to find Gordon, thing inevitably do not work out well. The stream-of-consciousness style, a new departure for Bessette, and influenced by the nouveau roman, is surprisingly effective at driving the fairly routine story on but it does seem a bit dated, fifty years plus later.