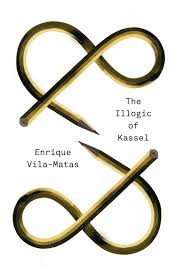 The latest addition to my website is Enrique Vila-Matas‘ Kassel no invita a la lógica (The Illogic of Kassel). This is the most recent to date of his novels published both in English and Spanish. It involves the participation of the narrator (i.e.Vila-Matas) in Documenta-13, an event held every five years in Kassel, Germany, devoted to avant-garde art. We follow his examination of the various works, some of which he is fascinated by, some of which he is bemused by and some of which both bemused and fascinated by. His role is to sit in a Chinese restaurant, well away from the centre of Kassel and simply do what he normally does when writing a novel, i.e. write, though people can come up to him and talk. In addition, he volunteers to give a Lecture to Nobody, in a remote part of the forest bordering Kassel.

The Chinese restaurant session is something of a farce, as he effectively only has one visitor, a fellow Catalan, though we get considerable description about the event, including his nervousness and his inability to communicate with the people in the restaurant, who either speak German or Chinese but nothing else. Indeed, communication or lack of it is one of the themes of the novel. The other main theme, that comes up frequently, is the nature of art in the modern period and the role of art and the artist. Various people, including, of course, the narrator, give their opinions on it, though perhaps the most interesting might be that given to the narrator by Salvador Dalí, namely that there is no avant-garde but there is always Giorgione’s The Tempest, which revolutionised everything.

One Reply to “Enrique Vila-Matas: Kassel no invita a la lógica (The Illogic of Kassel)”