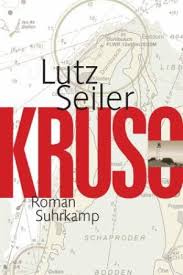 The latest addition to my website is Lutz Seiler‘s Kruso, part of my feeble effort to read shortlisted books for this year’s book prizes, other than the Man Booker. This book was not only shortlisted for the German Book Prize (Deutscher Buchpreis) but won it. I had anticipated that it would win so had already acquired it. This was not prescience on my part, as most commentators had forecast that it would win. Most reviewers liked it but the Frankfurter Allgemeine called the decision to give it the prize a dubious decision (link in German).

The book is set primarily on the island of Hiddensee, an island off the coast of the then German Democratic Republic, in the months before the fall of the Soviet system. Edgar (Ed) Bendler, a student of German literature at university, has lost his girlfriend (knocked down and killed by a tram) as well as his cat. He sees an old postcard of Hiddensee and decides to spend his summer holidays there. The island serves as a jumping off point for people escaping East Germany to the West (it is not far from Danish territory) as well as being a holiday resort. Ed works in the local café, which is essentially run by a man called Alexander Krusowitz, known as Kruso to some and Losch to others. The two men become close for various reasons. Both are lovers of poetry and nature. Kruso’s sister, Sonja, drowned, while his mother, a former circus performer, died, when she fell off a high wire. Both men share their losses, not least because Sonja looks a bit like G., Ed’s late girlfriend. Kruso feels that it is his role to protect the people known as the Shipwrecked, the drifters who come to the island, often looking to escape to the West. His concern for them is partially caused by his sister’s drowning. The island takes on something of a mystical role for both Kruso and Ed but, gradually, as the breakup of the Soviet system accelerates, people, both the Shipwrecked and staff of the café, drift away, leaving Kruso, Ed and the East German officials. It is a first-class novel about the fall of the Soviet system, group dynamics, escape and freedom and I would like to hope that it will be translated into English, though the last two winners of German Book Prize have yet to make it in English.

One Reply to “Lutz Seiler: Kruso”