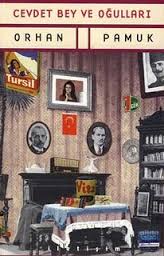 The latest addition to my website is Orhan Pamuk‘s Cevdet Bey ve Oğullari [Cevdet Bey and His Sons]. This is his first book, which has yet to be translated into English, though is available in several other languages. It is not like his later books, in that it is a realist family saga, set over three generations, rather than a post-modernist work that he is better known for. Cevdet Bey has taken over his father’s timber shop and converted it into a lighting and hardware shop, where he has done very well, thanks to a city lighting contract obtained by bribery. The first part of the novel is set in 1905 and follows a day in the life of Cevdet Bey. He is thirty-seven years old and has got engaged to a pasha’s daughter but is dealing with a sick and cantankerous brother. The second and main part is set between 1936 and 1939 and follows Cevdet Bey’s three children and, in particular, Refik, his second son and Refik’s two friends. All three are unhappy with their lot, even though they come from prosperous families, unhappy with the way Turkey is going and unhappy with Turkey’s place in the world. The final part is set in 1970 and follows Ahmed, Refik’s son, and his artistic endeavours and his romantic relationship. While not of the quality of his later works, this is is still an interesting family saga that gives a portrait of Turkey in the twentieth century, albeit from the perspective of the prosperous. But why can you read it in Arabic, Bosnian or Chinese but not English?