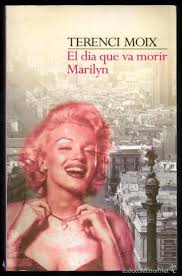 The latest addition to my website is Terenci Moix‘s El dia que va morir Marilyn [The Day Marilyn Died]. This book, dedicated to everyone who was twenty the day Marilyn Monroe died, had considerable success in Catalonia and Spain. It tells the story of Barcelona and the era from the 1930s to the 1960s as seen through the eyes of a specific family. The main character is Bruno but we also follow the story of his parents (father, pro-Franco, fought in the Civil War; mother seeking greater independence for herself), his best friend, Jordi, who is gay when it was illegal in Spain and his sickly brother, Carlitus, who dies during the course of the book. The key issues, apart from Jordi’s homosexuality, are popular culture, particularly the cinema, economic improvements, marital infidelity and political changes. It is very detailed and very well written but, not sadly, published in English.