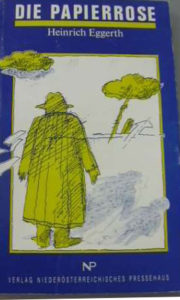 The latest addition to my website is Heinrich Eggerth‘s Die Papierrose [The Paper Rose]. It is narrated by a man whose almost ten year old daughter has died of a brain tumour. He visits her grave almost every day and talks to her, over a period of many years. The books is his (obviously one-sided) conversations with her. We learn about how she died, the two operations she had and her cheerful, chatty nature. We also learn about how bitter he is that she had to die before her time and how he feels guilty – was the tumour caused when she fell off him, when playing, or was God punishing him for not quitting his smoking habit? He tells her of his life and the life of their family (he has a wife and another daughter, though they are barely mentioned) and imagines her growing up and having a family of her own. It is a sad book but not mawkish or overly sentimental. Apart from a few poems, none of Heggerth’s work has been translated into English or any other language. 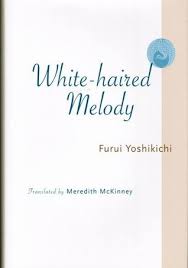 The latest addition to my website is Yoshikichi Furui‘s 白髪の唄 (White-Haired Melody). This is a superb story about an elderly man (he is, in fact, only fifty-seven) and his confrontation with ageing and death. The unnamed narrator, his young friend, Yamagoe, and his two fifty-seven year old friends, Sugaike and Fujisato, confront death on a regular basis. All of them have lost family members to death, often a premature death, and Furui fills the book with a catalogue of major disasters in Japan, which have some relevance to the characters. In the case of Yamagoe, it seems all of his family members were born at the same time as a disaster. The others remember these various disasters and, in the case of recent ones, we and they learn about them during the course of the book. They also recount various gruesome tales of death and disaster. Yet, the characters generally seem to take death and brushes with death in their stride, accepting that death is a normal part of life. It is not all death and disaster. As they get older, they have memories, sometimes, of course, of death, but also of their earlier lives and, in the case of the narrator, sometimes false memories. Other features of ageing – voices sounding distant, the fluidity of time and a general acceptance of life, as they have accomplished all that they set out to accomplish – are also brought in. Overall it is a first-class novel and can only make us regret that more of Furui’s work is not available in English.