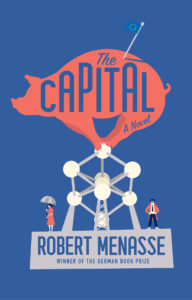 The latest addition to my website is Robert Menasse‘s Die Hauptstadt (Capital). This is a satire on the European Union, its officials and some of the nationalities who are part of it. The story starts in Place Sainte-Cathérine, in the centre of Brussels, where most of the main characters are to be found at the beginning of the book, including two senior EU officials having an affair, an Auschwitz survivor, a hitman who has just killed someone, an Austrian visiting professor and a pig who seems to be wandering round the square. We follow their stories but the two main themes are (the lack of) EU pig policy and an attempt by the Commission to exploit Auschwitz for a jubilee to promote the Commission. Many of the stories merge while many take unexpected and, in some cases, not very pleasant turns. Menasse has fun mocking EU officials and various nationalities while raising the issue of nationalism vs supranationalism.