The latest addition to my website is Rita Indiana‘s La mucama de Omicunlé (Tentacle). This is a wonderful post-apocalyptic novel from the Dominican Republic, set both a short time into the future and but also, partially, in the seventeenth century. Acilde Figueroa, a woman, goes from being a pretend male prostitute, to being a maid for a Santeria priestess to becoming a man, and a man who may be be able to go back in time and save the world from an ecological disaster. The Servants of the Apocalypse, the Chosen One, performance art, an underwater god called Olokun, pirates, invading Spaniards, President Said Bona, with his voice like Balaguer’s and face like Malcolm X, video art, fishing and its difficulties, rare engravings about buccaneer life in the seventeenth century and, of course, quite a bit of sex, murder and mayhem, are all grist to Indiana’s mill. 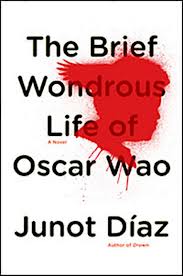 The latest addition to my website is Junot Díaz‘s The Brief Wondrous Life of Oscar Wao. As this was voted best novel of the century (so far), I really had to read it to see if it was the best. It is not the best novel of the century so far but it is still a very fine novel. It tells the story of the de León family, a family originally from the Dominican Republic but who immigrate to New Jersey, where young oscar, a fat nerdy kid, grows up. Oscar has two main interest in his life – science fiction and falling in love. We do not learn how good a writer of science fiction he is, though his submissions are rejected but, when it comes to the opposite sex, Oscar is not very successful. While telling us Oscar’s story, Díaz also tells us about the situation in the Dominican Republic over the past fifty-sixty years, both from the perspective of the de León family as well as from the perspective of the population as a whole, both of which suffer a great deal from the repression of Trujillo, his henchmen and his successors. Díaz’s skill is to switch registers, from the humour and slang, often with sexual undertones, of the Dominican Republic to the grim story of the de Leóns and many others in the Dominican Republic as well as the pathos of Oscar’s own story, with the brutal repression of Trujillo and Co to the fore. This is a very fine novel and one I can heartily recommend but I don’t think it qualifies as the best novel of the 21st century. I made a quick survey and found eleven others I thought were better, nine of which were not written in English and five of those available in English translation. The BBC list has no books in the top twelve not written in English and only two in the top twenty, a ludicrous situation. Forget the list, however, and enjoy this book.