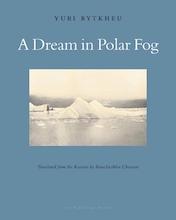 The latest addition to my website is Yuri Rytkheu‘s Сон в начале тумана (A Dream in Polar Fog). Rytkheu is from Chukotka, the far north-eastern part of Russia. The novel opens in 1910. A ship is trapped in the ice and they try to use explosives to free themselves. John MacLennan, a Canadian, is injured and has to be taken overland to a doctor. However, a nearby tribe has a native doctor who cures his gangrene but when they return the ship has managed to free itself and left. John has to overwinter but is so impressed with the Chukchi way of life, he decides to say there. We follow his life there with problems, tragedies, disasters and, above all the threat to their way of life from whites, with their wholesale destruction of the animals, and, towards the end, the hunt for gold and the Bolshevik Revolution. Rytkheu tells an excellent story, sympathetic, of course, to the Chukchi way of life but showing their faults as well.