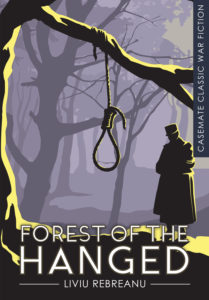 The latest addition to my website is Liviu Rebreanu‘s Pădurea spânzuraților (Forest of the Hanged). Our hero is Apostol Bologa. He is ethnically Romanian – his father had been imprisoned for his role in drawing up a memorandum of the grievances of the Romanians in Transylvania which, till 1918, was part of the Austro-Hungarian Empire. To impress his fiancée, Apostol joins the Austro-Hungarian army and has a successful career, fighting the Russians. However, he learns that his unit is to move and fight the Romanians, something which he cannot do and he considers deserting. He knows the consequences of this as he has seen a man hanged for just that reason (Rebreanu’s brother was also hanged for desertion.) He is on the point of desertion when he is badly wounded in a Russian attack. He takes a long time to recover but disturbed by the issue of fighting the Romanians as well as his murky love life and the fact that he has not fully recovered from his injuries, he becomes seriously troubled. It is a superb novel, really getting into the convoluted mental state of our hero.