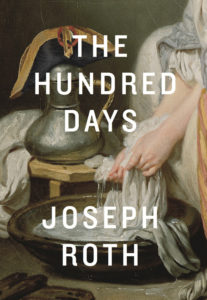 The latest addition to my website is Joseph Roth‘s Die hundert Tage (The Ballad of the Hundred; later: The Hundred Days). This novel tells the story of Napoleon’s hundred days. i.e. from when he fled Elba to his defeat at Waterloo and surrender to the British. The book was criticised when it first appeared in Britain as it is relatively sympathetic to Napoleon. As well as following Napoleon – his loneliness and his hubris – we also follow the story of Angelina Pietri, a Corsican laundrywoman in the Tuileries, Napoleon’s palace, who, though receiving and rejecting two marriage proposal and having a son by one of the men, adores only one man, Napoleon Bonaparte, remaining faithful to him to the end. Roth tells his story well and while he is certainly fairly sympathetic towards Napoleon he can also see his faults.