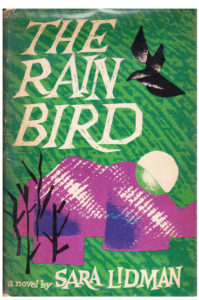 The latest addition to my website is Sara Lidman‘s Regnspiran (The Rain Bird). The novel tells the story of a small Swedish farming community at the very end of the nineteenth century. Egnor, a former womaniser and drinker but now a very devout fifty-year old Christian is married to Hanna. They had been trying for a child without success but now Linda arrives unexpectedly. Egnor feels he is too old to be a father. Hanna is torn between Egnor’s strict religious rules and her child and, once she is old enough, father and daughter clash. When Egnor dies, a death foretold by Linda, things get worse. It starts with Simon, a hard-working but not very bright boy, adopted by neighbours, and as Linda becomes a young woman, she brings disruption to the village, both intentionally and unintentionally. Lidman tells her story well, showing Linda as a complex character. Is she bad, out of her time or just self-willed?