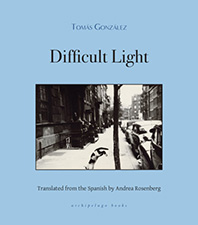 The latest addition to my website is Tomás González‘s La luz difícil (Difficult Light). It is narrated by David, a Colombian painter. While he and his family, were living in New York, his son, Jacobo had a terrible car accident, leaving him in permanent and agonising pain. Jacobo decides that he cannot go on living and, with the support of his family, he plans to die. Much of the book is David, now aged 78, widowed, going blind and back in Colombia, writing about Jacobo and the events leading to his planned death, including a car journey from New York to Portland, Oregon. However, we also see the world through David’s painterly eye and it is the combination of the Jacobo plot and David’s view of the world that makes this a masterful novel.