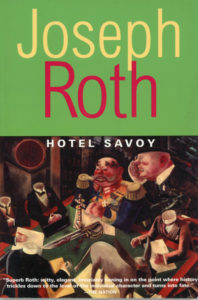 The latest addition to my website is Joseph Roth‘s Hotel Savoy (Hotel Savoy). It tells the story of Gabriel Dan who, in 1919, is returning from three years in a prisoner-of-war camp in Russia. The novel is set entirely in the now Polish town of Łódź which is facing something of an upheaval – loss of German population, numerous returning soldiers passing through and economic disruption. Gabriel stays at the Hotel Savoy, which becomes a microcosm for society, with the poor staying in cramped quarters on the upper floors and the rich enjoying themselves downstairs. We see the city and its problems though Gabriel’s eyes as he tries to survive. His rich uncle offers no help but he manages to earn some money but is less successful with Stasia, the dancer who lives above him. However, a crisis is building up, caused particularly by labour agitation and the wise seek to move on. Roth tells the story very well as we get a wonderful portrait of post-World War I Eastern Europe through Gabriel’s eyes.