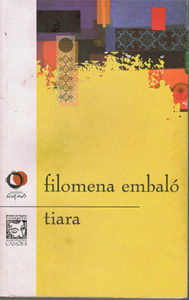 The latest addition to my website is Filomena Embaló‘s Tiara. This is apparently the first novel published by a Guinea-Bissau woman. It tells the story of Tiara, originally from the fictitious country of Porto Belo (presumably based on Guinea-Bissau). Because of a civil war, her family has to flee to Terra Branca (presumably based on Portugal). There she meets Gino and Kenum from Muriti, whose country is still fighting for independence. She will marry Kenum and join him in Muriti in the struggle. During an air raid she loses her baby and can no longer have children, but, after independence she works hard for the country, sometimes conflicting with local customs. e.g. when she opposes female genital mutilation. We follow her life with its many ups and downs, particularly the opposition of her parents-in-law. It is a well-told story of woman who stands up for herself but sadly it has not been translated into any other language. Thanks to Bookshy for bringing this to my attention.