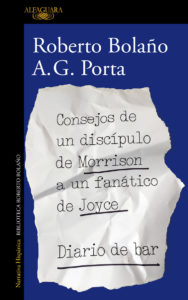 The latest addition to my website is Roberto Bolaño‘s and A G Porta‘s Consejos de un discípulo de Morrison a un fanático de Joyce [Advice from a Disciple of Morrison and a Fan of Joyce]. This novel was written before both writers were famous and tells the story of a Catalan writer, Ángel Ros, who is writing, not very successfully, a Barcelona Ulysses with one major difference, namely that his hero, Dedalus, is an armed robber. While Dedalus is an armed robber, so are Ángel Ros and his girlfriend, a South American called Ana. The two make no effort to conceal their identities and are soon wanted by the police, as, indeed, are others, as there appears to be a crime spree in Barcelona at the time. We follow Dedalus, Ángel and Ana and, frankly, it does no go particularly well for any of them. As Bolaño commented, it is very violent and while it is an interesting idea, it is not a great novel and would not be here, were it not for its authors.