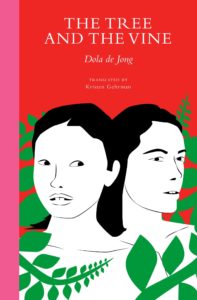 The latest addition to my website is Dola de Jong‘s De thuiswacht (The Tree and the Vine). This book became famous as it is about lesbianism at a time (1954) when respectable Dutch women did not write about the topic. Bea is a sensible and responsible young woman. She meets Erica, an erratic and unpredictable young woman. Both are trainee journalists. It is 1938. They soon become close friends and move in together. Bea finds Erica’s behaviour both trying yet fascinating. They fall out when Bea’s boyfriend, Bas, and Erica clash. Erica wins and Bas is gone. It is only halfway through the book that Erica admits to Bea that she is lesbian and feels sure that Bea is too. Bea is certainly spellbound by Erica but she is resolutely heterosexual. The two continue their up and down relationship but Erica is half-Jewish and a German invasion is imminent. The book has now just been published for the third time in English and clearly the lesbianism helps but what makes it, is the complex and unpredictable relationship between two very different women.