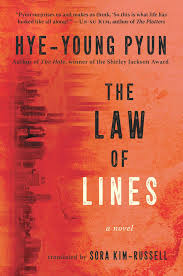 The latest addition to my website is Hye Young-Pyun‘s 선의 법칙 (The Law of Lines). This is another first-class novel from the South Korean writer. It tells the tales of two young women who both have tragedies. In one case her house burns down and her father is badly burned and later dies. In the other case, a teacher’s half-sister kills herself. Both women feel someone is to blame for what happened and both set out to investigate. Inevitably the two stories intersect. The root cause seems to be poverty and what people do to escape it, not always making wise decisions. Indeed, as well as the two women and the two victims, we see quite a few others who suffer and, in some cases, die because of the poverty trap. It may be grim, as are his other books, but it is a very well-told tale, with twists and unexpected turns.