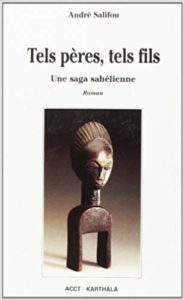 The latest addition to my website is André Salifou‘s Tels pères tels fils [Like Father, Like Son]. Salifou was a long-serving Niger politician but he also wrote many books, including novels. He calls this book a Sahelian saga and it is set in three time periods – the pre-colonial era, the colonial era and the present. We follow a small group of people and their descendants. They all have one thing in common – they are scurrilous rogues, corrupt, vicious, interested in only amassing wealth, no matter how, and enjoying the proceeds of wealth and power, mainly in the form of women and alcohol. Rape, pillage, theft, lying, cheating and abuse of women are all part of their daily modus operandi, right up to the present day when Fewmo turns out to the worst of the lot. If Salifou’s portrait is an accurate description of his country, then it is in terrible shape.