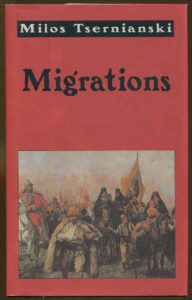 The latest addition to my website is Miloš Crnjanski (Mils Tsernianski)s Seobe (Migrations). This novel is set during the 1744 campaign of the War of the Austrian Succession and involves a Serbian troop under the command of Major Vuk Isaković. We follow their journey from modern-day Croatia to the modern-day French-German border. At the same time we follow the fate of Vuk’s wife and daughters, left behind with Vuk’s unmarried brother, Arandjel, a merchant. Neither story goes well for the protagonists. The Serbians have no idea where they are going or why and they are treated badly by the rest of the army. They fight and lose men but do not why or where. Meanwhile back home, Arandjel is attracted to his sister-in-law. This novel is both about the futility of war and about Serbian nationalism and the unhappy history of the Serbian people. It is thoroughly miserable but every well-told.