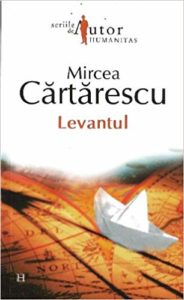 The latest addition to my website is Mircea Cărtărescu‘s Levantul [The Levant]. This is a mock epic, which, in the original Romanian was written primarily in verse form, but, for the translations (French, Italian, Spanish and Swedish but not English) was primarily converted to prose, with some verse. It tells of the adventures of a band of Romanians and quasi-Romanians in the first half of the nineteenth century who wish to liberate Romania from the Ottoman Empire. As this is a mock epic, it is written in a deliberately flowery language, paying homage to various Romanian writers of the past and present, and involves the usual fantastical creatures and places, great heroes, battles and, of course, treachery. As it is post-modern, Cărtărescu, as author/narrator, makes numerous appearances, chatting both to his characters and to his imaginary (female) reader, before inviting all of his characters to coffee in his present-day Bucharest flat. It is great fun and very cleverly done but sadly not available in English.